A Brief History of the Humble Whittling Knife

The whittling knife stirs up iconic imagery of America’s past, of young boys and men using a simple knife to carve a small piece of wood.

Wood whittling has been around since ancient times. However, the “modern” idea we have of whittling is an American phenomenon that became very popular during the Civil War. Soldiers needed something to do to pass the time between battles, and whittling became a popular mode of stress relief and creativity during the war.

After the war, former soldiers often turned to exchanging their whittled goods in exchange for shelter as well as food and clothing. 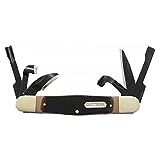 Whittling terminology can be a bit confusing, because to whittle is often used interchangeably with the term “carve.” However, whittling is technically not the same thing as carving wood.

Because a chisel can get deeper into a block of wood, carving is more typically used for wood sculpture.

Still, while some wood carvers look down on whittling as just a hobby, whittling in and of itself can also be used to create amazing wood sculptures and creations, even without the additional chisel and hammer.

Whittling in America After the Civil War

During the Great Depression, boys enjoyed whittling as a cheap hobby that simply required a pocket knife and any stick or piece of wood they might find lying around. In the 1950s, the Boy Scouts officially included whittling as a required skill and began to sponsor whittling contests.

However, from 1965 onwards, interest in whittling waned in part due to the rise in the entertainment industry, as well as the reduction of wood shop classes in public schools. The mid-1970s saw a brief resurgence as whittling and woodcarving clubs emerged but failed to capture the interest of younger generations.

Starting in the 1980s and the advent of the first commercial video games, kids were often engaged electronically. Using the hands was more about manipulating a joystick or video game controller to creating something from scratch. From Ataris, to Playstations, to Xboxes, and now virtual reality, young people have had increasingly strong virtual worlds to retreat to.

Yet, in recent years, non-electronic arts and crafts have been staging huge comebacks as people (including young adults) look for ways to take a break from all the computer screens and smartphones.

Often, these historical crafts, which were traditionally performed by one sex or the other, are now being enjoyed by all. For example, knitting, which has recently become hugely popular, was once considered to be something women did, but is now a hobby enjoyed by both men and women, especially younger men.

Whittling is also undergoing a resurgence of interest with both men and women, and even outside of the United States in places like the UK.

“As a hobby, whittling and carving has really taken off,” Robin Wood, chairman of the Heritage Crafts Association, told the Telegraph in 2013. “Eight years ago, when I started teaching in Britain, I was the only person doing it. Now there are around 30 teachers all over the country, most of whom I taught.”

Proponents of modern-day whittling say that it is a terrific antidote to the stress of modern life, and this is why it is appealing to both men and women of all ages.

Beyond Whittling: Lots of Fun with Wood

For wood carvers and enthusiasts, you can find more and more fun events and happenings in the world of wood carving and whittling. In the UK, visit the annual Spoonfest, dedicated to wooden spoon carving.

Or, if you are really brave, try your hand at chainsaw carving! The annual Whittle the Wood Rendezvous chainsaw carving competition and festival happens every year in Craig, Colorado, now in its 19th year. At the event, contestants work their chainsaw magic on massive tree stumps from trees that were dying of disease and needed to be removed from the local park.

Get Started with Your Own Whittling Knife

Intrigued by whittling? All you need is a piece of wood and a simple, sharp pocket knife. With more and more people enjoying this time-honored craft, now is a great time to jump in and try your hand at whittling.